How Santa Got His Name

HAVE YOU EVER WONDERED HOW SANTA CLAUS GOT HIS NAME?

Is he a Madison Avenue creation, the ultimate PR guy for holiday materialism? Are Santa, Rudolf, the Heat Miser, and Jack Frost all products of creative imaginations?

As we will see they are all linked together.

SANTA AND THE DUTCH

Our first stop is the beautiful country of the Netherlands, because the name “Santa Claus” comes to us from the Dutch.

And it so happened that the Dutch talked a lot about a guy named Sinterklass.

See how similar they are? The Dutch name carries right over into English with only a few changes. The word “sinter” means “saint,” and “klass” is shorthand for the name “Nicholas.” (like calling a Samantha, “Sam”)

Therefore, Santa Claus is a direct reference to someone by the name of St. Nicholas. Santa Claus and St. Nicholas are one and the same. Just a different transliteration of the same name.

Nicholas was a real person who lived in the 3rd century. He was from the city of Myra, in what we know today as Turkey. Later in life he became the Bishop of Myra.

He was a Christian leader known for his radical generosity.

As a teenager he inherited a large fortune from his parents and because of the Bible’s instruction to take care of the poor, he was determined to give all his money away in his lifetime.

One story tells of a poor farmer in a nearby village with three daughters. This farmer was so poor that he could not pay for his daughters’ dowries (to get married). Therefore the girls would need to be sold into slavery which was only a slightly better option than starving to death.

Nicholas heard about their plight and on three consecutive nights he rode past the farm house and threw a bag of money into an open window, or perhaps, down the chimney (accounts vary). The bags of coins, it is said, happened to land in the stockings that the poor family had washed and were hanging out by the fire to dry.

With the help of such stories, the legend of Nicholas grew and grew. The church designated him as a “saint.” He soon became the most famous Christian of his time, with a global reputation for generosity and after his death his legend grew and grew.

For hundreds of years during the Middle Ages, “St. Nicholas” was the most common name for a new church! St. Nicholas was celebrated, feasted and remembered with great enthusiasm.

He was a rock-star Christian.

So why does Santa delivers about 3 billion presents to good little boys and girls each December, never asking for money? Because he is a modern incarnation of Nicholas.

By the 1500’s however, church leaders were concerned that some people were worshiping St. Nicholas more than Jesus. Most of Nicholas’ feasts were in December, because his birthday was December 6th.

It became so bad that in Germany there was a movement to tone down all the Nicholas stories, and to instead return to the worship of Jesus Christ.

Instead of celebrating the birthday of Nicholas, the plan was to celebrate the birthday of Jesus! This would become the modern holiday we know as Christmas. It was a call to remember the birth of the God-man, Jesus, who inspired Nicholas in the first place.

And this leads us to Kris Kringle.

Are you ready for this?

The new focus to worship the birth of Jesus, the Christ child, or in German, Christ Kindle.

IT ALL COMES BACK TO JESUS CHRIST

The surprising fact of the matter is that Santa Claus, St. Nicholas and Kris Kringle all point us back to Jesus Christ.

Santa Claus was not the creation of a toy company. He a tapestry of history and legend, where all the threads can be followed back to Jesus of Nazareth.

Santa Claus is one of God’s greatest stealth ambassadors, invited to ride in every parade, take pictures in every mall, appear in every Christmas concert, and welcomed into (almost) every country.

And all the while, whether people know it or not, his very presence is testimony to God’s Son, Jesus Christ.

If you are inspired by the concepts of peace on earth, serving the least, loving the unlovable, helping others, being generous… guess what?

That is what it means to be a Christian. A follower of Jesus Christ.

Jesus said: “For God so loved the world that He gave His only begotten Son, that whoever believes in Him will not perish but have everlasting life” (John 3:16).

You just have to believe.

Tell Jesus you want to follow Him now. Recognize and confess you often get it wrong; you say and do the wrong things. Thank God that Jesus took care of your mess by absorbing the consequences of your actions when he died on the cross. Because Jesus took care of the mess, you can be forgiven and get a fresh start, a second chance. If you talk with God about these things He will accept you, no questions asked, no background check required.

If would like to find out more about Jesus, or talk more about the true meaning of Christmas, email me at PastorCraig@LakeCitiesCommunity.org. 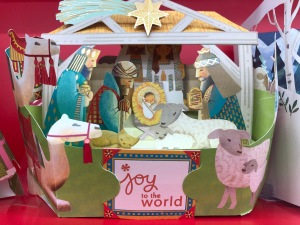 You are free to use this essay as a Christmas devotional
or in any other way that will enhance your Christmas celebration.
You do not need to give me credit. To God be the glory!

Church Unity Memes for Everyone!

Church Unity Memes for Everyone!

A Cry For Justice

Wings Like Eagles in the Desert: A Journey through the Wilderness of Chronic Illness

An Odyssey of Life Off the Beaten Path